Book a callTry Atom for Free
Back to blog

This summer Atom Learning launched a nationwide search for the best young writer in the country. We challenged children to write a piece of original fiction about a day that changed the world.

As the competition drew to a close in September, we received more than 1,500 entries. Amongst those stories, many young authors tackled topical issues like climate change, global conflict, food poverty, and disability.

A team of 20 judges worked through the entries and were judged against:

From the top of the Eiffel tower to the bottom of the deep blue sea, the winning stories took us to faraway lands, found creative solutions to real-world problems, and wrote stand-out stories that captivated the judges.

We hope you enjoy these winning stories as much as we did!

Luna’s story took a classic theme and put a playful, charming twist on it. The heartwarming plot reminds us to have the courage to face our fears, and never judge a book by its cover. She demonstrated her writing skills with varied language, excellent dialogue and rich vocabulary - all in under 500 words. Her charming story secured her family a trip to Disneyland Paris and a cash prize of £2,500 for her primary school. 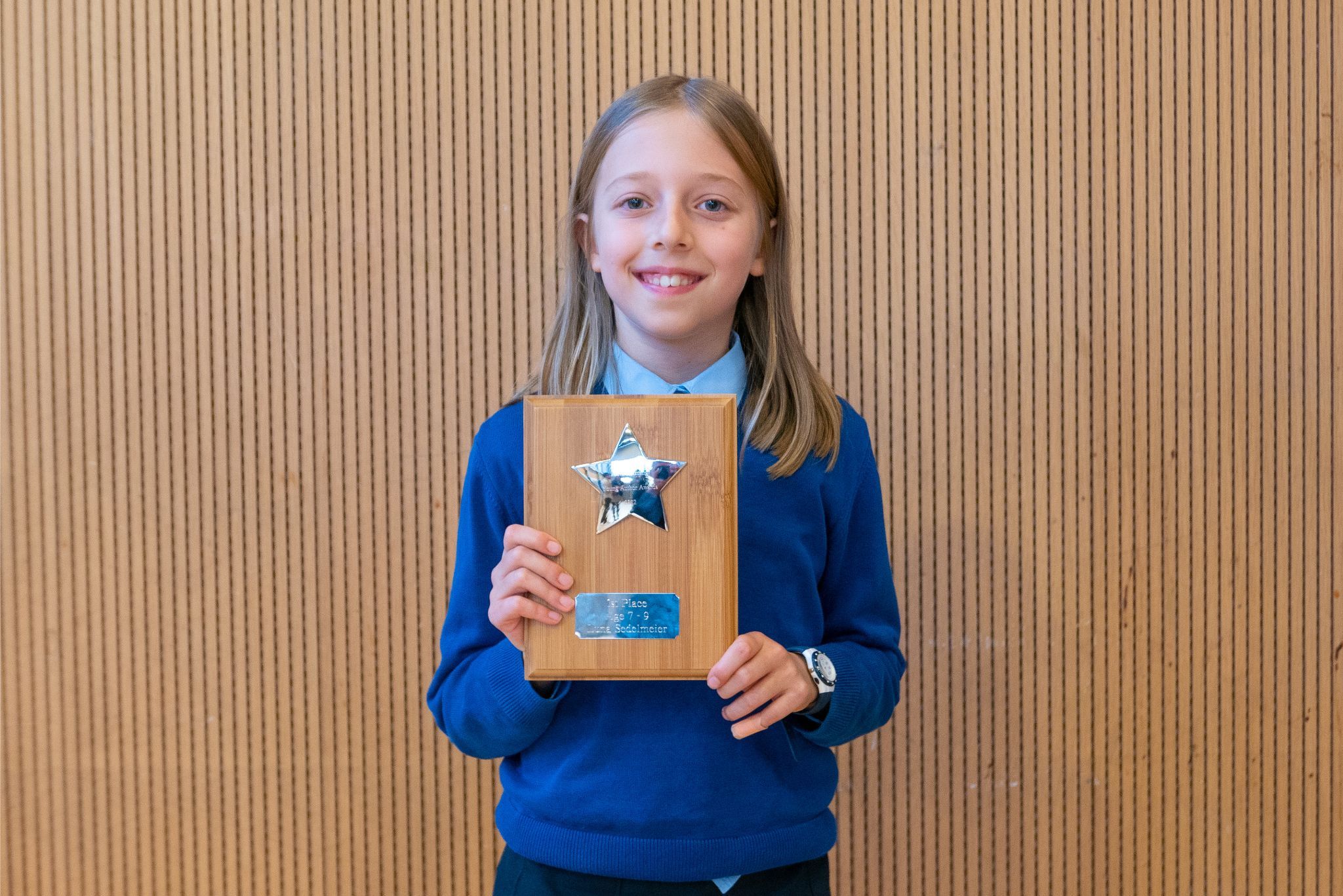 Every child knows there is a monster under their bed. Despite what their parents say, they know it. Ollie was no different. Often, he’d stay awake at night, sweaty palms, racing heart, hoping that the monster wouldn’t come out from under the bed. But then came the day that changed everything.

One night, there was horrible thunder and lightning. Ollie lay on his bed, chattering his teeth and hugging his legs to his chest. Suddenly, a crack of thunder burst through the air, which was the last straw for Ollie. If there was one thing he was scared of more than monsters, it was thunder and lightning. He was petrified. He couldn’t move his body except for his eyes, which were frantically darting around. He was too scared to even scream for his parents. His football poster of Lionel Messi grinned at him with a disturbing look, his dartboard looked like a menacing face and the tree outside his room tapped on the window, making it seem like someone was trying to get in. His blood was freezing. Ollie slowly reached out his hand to find a book. At least books didn’t seem creepy.

“Oh, if only someone could read me a story,” Ollie whimpered, feeling all alone. But something heard him. Something felt sorry for him. That something came out from under the bed.

“Eeeek!” Ollie screeched. Now the two things that he feared the most had both come.”

Miki’s story follows the ‘jackal-mouse’ - a clever creature that finds an out-of-this-world solution to climate change. Full of intrigue and delightful details, judges were drawn into the story and rooting for the Jackal-mouse to succeed! Thanks to her creative approach, Miki has won an overnight stay at the London Zoo with her family and a cash prize of £1,000 for her primary school. 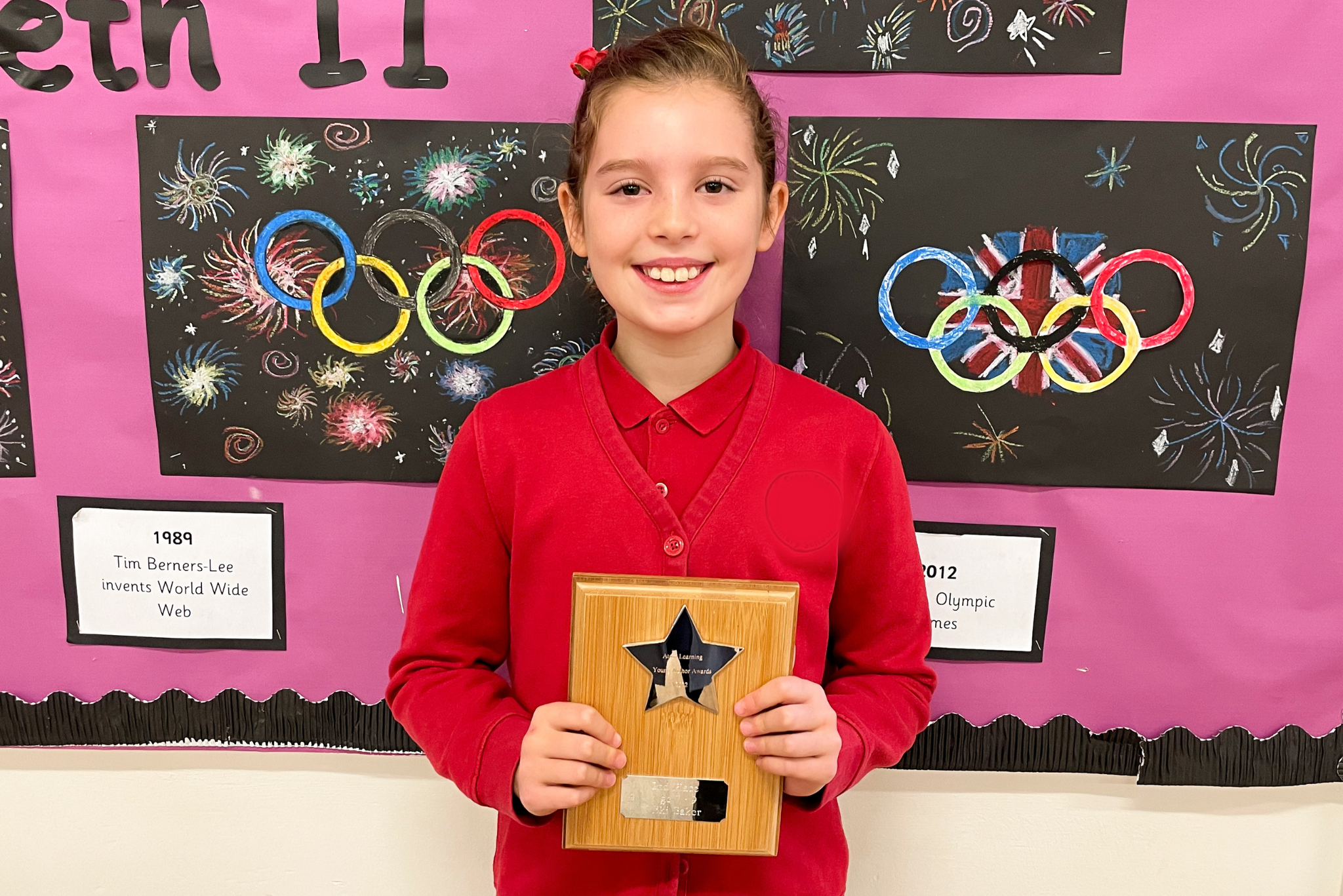 Hidden in the African savanna, under the shadow of Mount Kilimanjaro, lived a creature so strange and weird you might not believe it existed at all! Half jackal, half mouse, with electric blue fur and bright green eyes... It was the Jackal-Mouse. Each day lots of tourists would tear through the savanna trying to find this mysterious beast. Their safari jeeps spewed horrible, smelly fumes into the air, causing a thick smog to hang over the mountain so that no snow covered the top.

Kavya’s heartwarming story follows the unlikely friendship of a sloth and a zebra. This charming story featured strong dialogue and scene setting, and reminds us of the value of friendship above all else. Kavya’s endearing tale earned her a £250 voucher for Virgin Experience Days and £500 for her school. 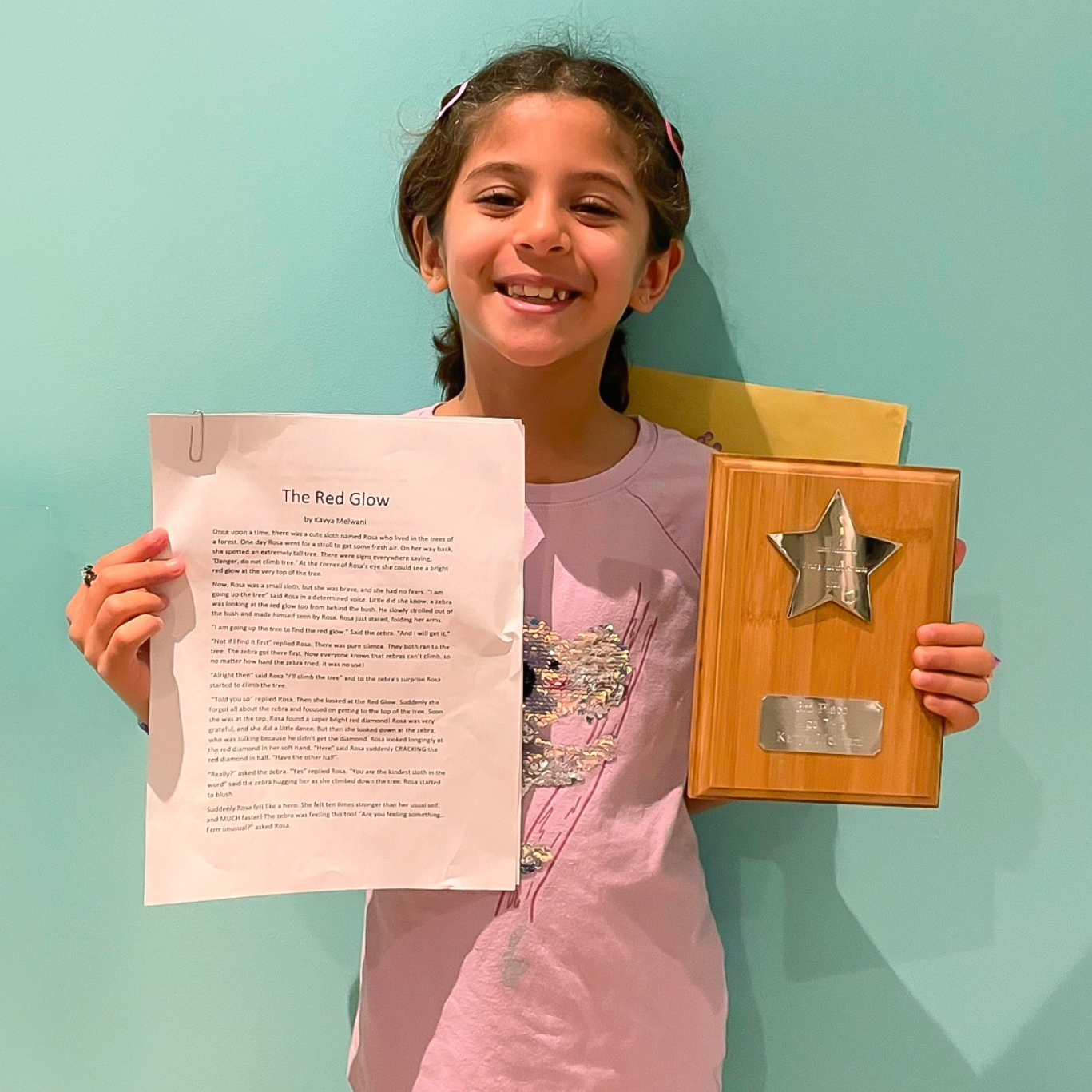 Once upon a time, there was a cute sloth named Rosa who lived in the trees of a forest. One day Rosa went for a stroll to get some fresh air. On her way back, she spotted an extremely tall tree. There were signs everywhere saying, ‘Danger, do not climb tree.’ At the corner of Rosa’s eye she could see a bright red glow at the very top of the tree. Now, Rosa was a small sloth, but she was brave, and she had no fears. “I am going up the tree,” said Rosa in a determined voice. Little did she know, a zebra was looking at the red glow too from behind the bush. He slowly strolled out of the bush and made himself seen by Rosa. Rosa just stared, folding her arms.

“I am going up the tree to find the red glow.” Said the zebra. “And I will get it.” “Not if I find it first” replied Rosa. There was pure silence. They both ran to the tree. The zebra got there first. Now everyone knows that zebras can’t climb, so no matter how hard the zebra tried, it was no use!

Harley’s imaginative tale took us on a whirlwind tour of iconic world landmarks as you’ve never seen them before. His well-structured story had strong pacing and is a testament to the power of humanity when we are working together towards a common goal. His joyful story secured his family a trip to Disneyland Paris and a cash prize of £2,500 for his primary school. 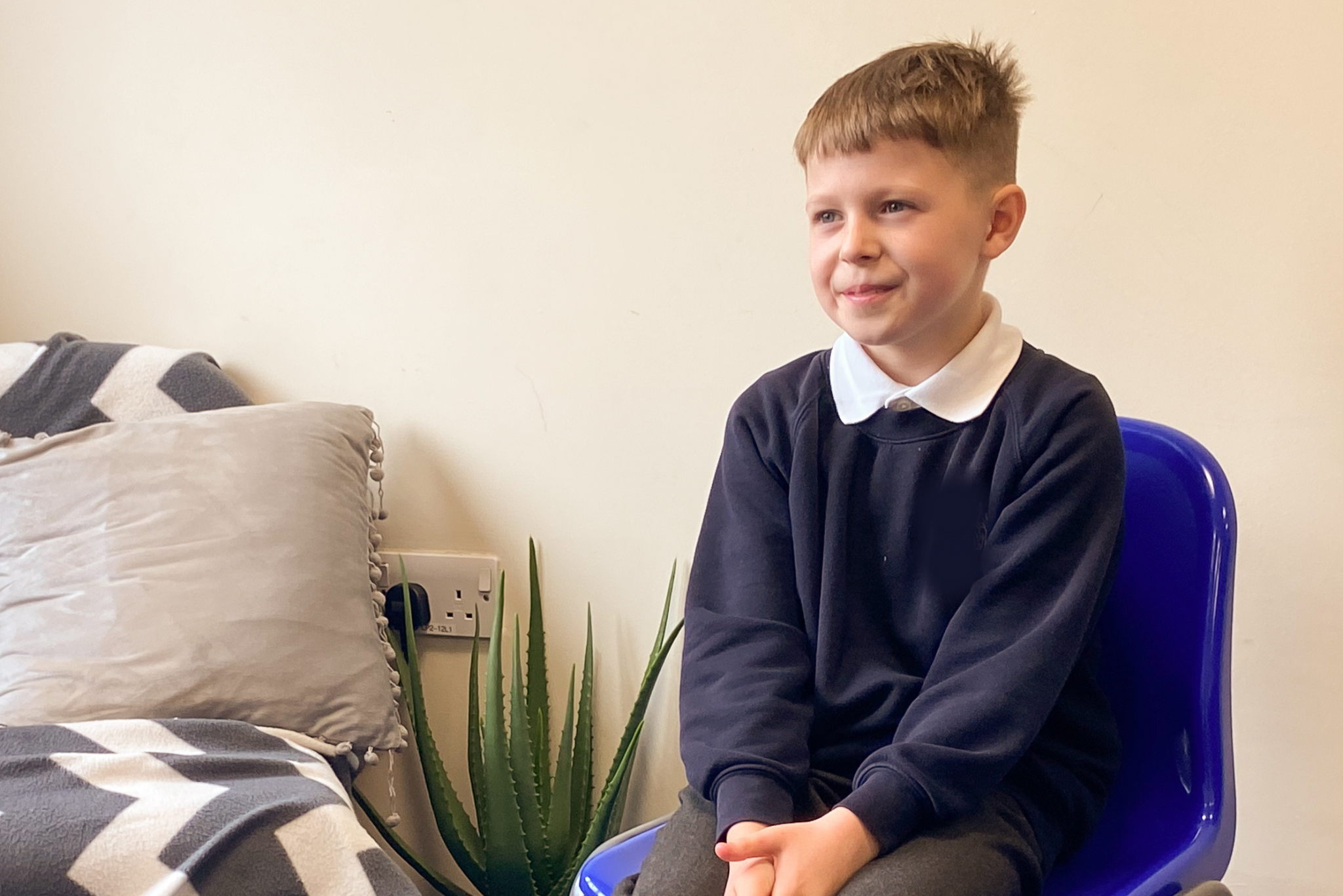 As much as Harley was enjoying flying there was a slight problem, he didn’t know how to land! The whole world was worried about him and all came together to help him land safely.

As he flew over London, all the soldiers had come together and put a giant bouncy castle on the roof of Buckingham palace, but as much as he loved bouncy castles he was too scared to land.

Then he flew over Paris, where all the bakers had come together to bake giant baguette ladders on the Eiffel Tower for him to climb down, but as much as he had always wanted to visit Paris he was still too scared to land. He flew over Italy where the Colosseum had been turned into a huge cake and all the chefs had come together to cover the leaning tower of Pisa with pizza dough and topped it with a deep spring pan pizza for him to land on, but as much as he loved cake and pizza he was still too scared to land.

He came to Mount Everest where all the hikers had come together and turned it into a giant ice cream mountain, Harley really loved ice cream so he flew down towards it, but as he licked the top he was still too scared to land. The world was getting really worried about him and how he would land safely.

Suddenly in the distance was his favourite thing in the whole world, an inflatable slide! The whole of China had come together and turned the Great Wall of China into a giant inflatable slide. He aimed straight for it and landed safely on the ‘Great Slide of China’ with all the world cheering him as he whizzed down it.

Amelie’s tale took us under the sea where we met Delphinus and the other sea creatures that make up S.E.A.L.S (Sea Environmental Anti-Litter Society). Her inspiring story featured vivid imagery, novel story arc, and a fantastical approach to cleaning up the world's oceans. Thanks to her aquatic tale, Amelie has won an overnight stay at the London Zoo with her family and a cash prize of £1,000 for her school. 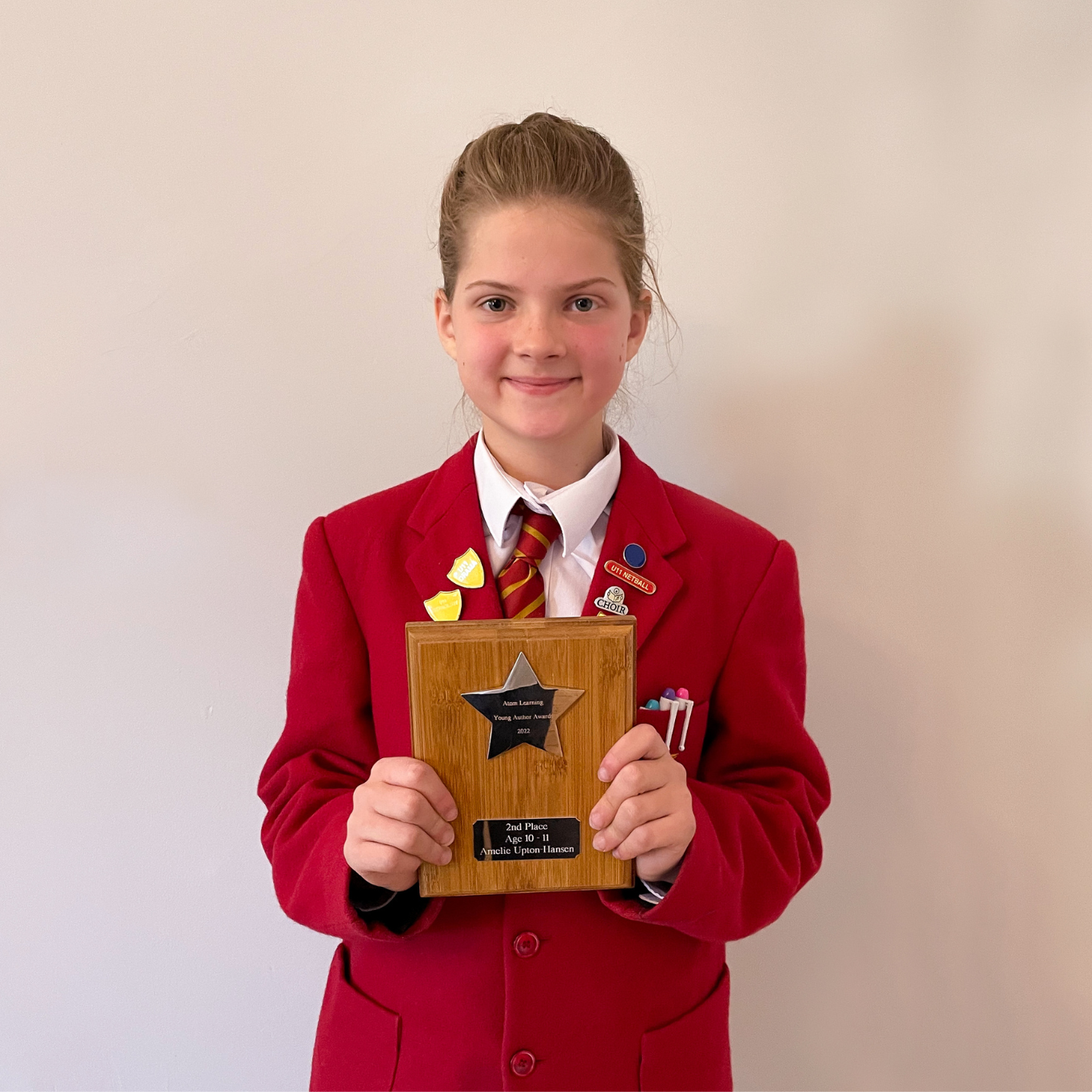 Early morning a stench of impending doom hung in the air, it lured families to the beach. Every step taken the smell got more pungent, until by the time they got there it was so strong they could taste the repulsive decay.

As they fearfully glanced down, horror burst from their disgusted eyes! They saw the massive pile of plastic sludge before them. Rage, anger, and guilt erupted inside them!

Except for Charlie… Charlie was 12 when it happened, and he knew this was going to be the day that changed the world forever. He was going to make a big difference and he had a cunning plan building up inside him.

Ranveer’s dystopian tale took us to a future society where the population has become addicted to social media - and there is only one antidote. His unique two-chapter structure helped build suspense throughout the story, and left the judges wanting to read chapter three! Ranveer’s nail-biting story earned him a £250 voucher for Virgin Experience Days and £500 for his school. 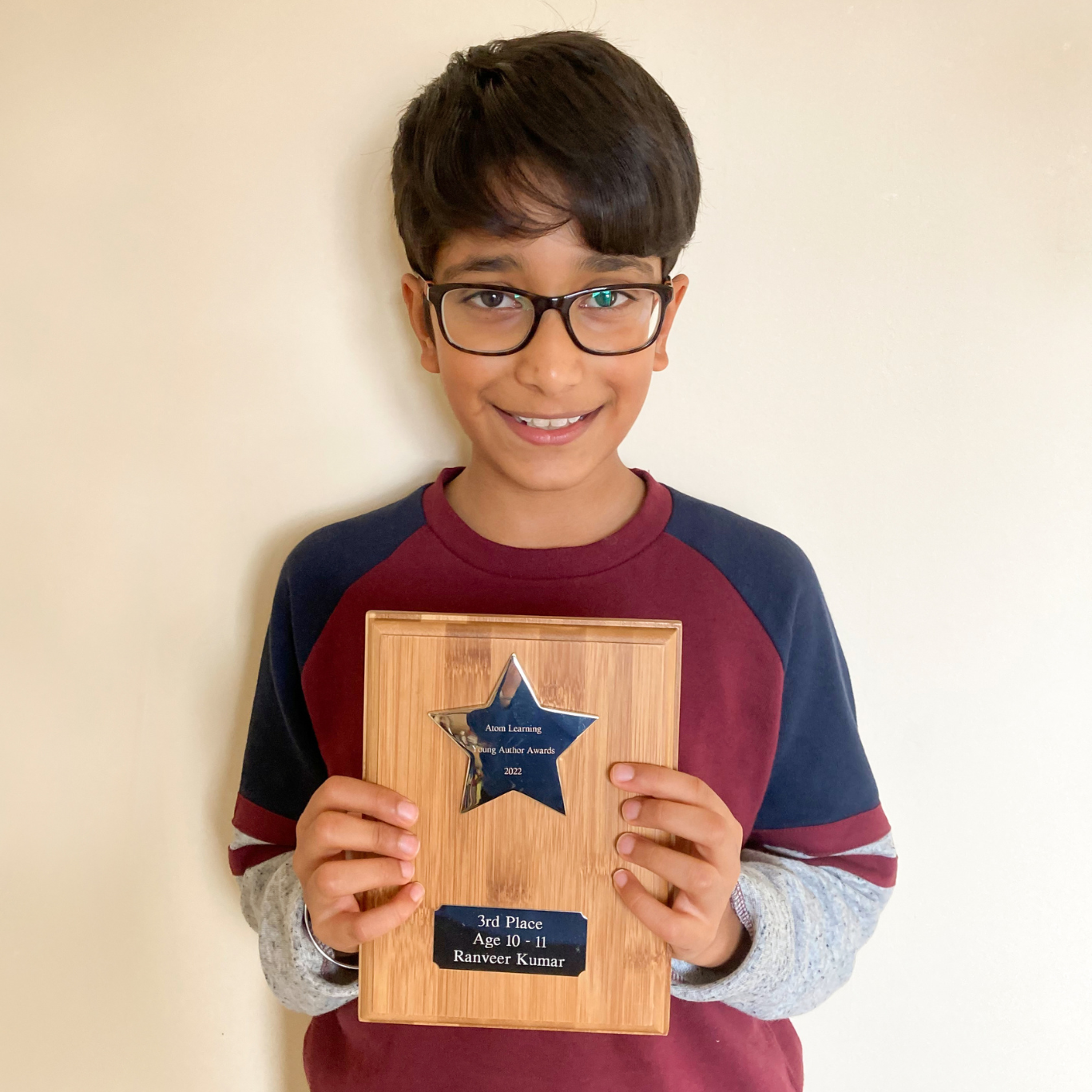 Five years ago, the popular social media companies Talos and Exosphere Communications joined forces and created the most well-engineered social media platform, Space Monkey. It dragged innumerable people into its terrible clutches like a whirlpool. Slowly but surely, exam results dipped, people became isolated, and progress stagnated. It created an unstoppable power, which could not be halted without some serious thought and ingenuity – qualities which were fast diminishing. But we had those.

“The master codes are almost finished,” I declared. “On your command, they will be ejected into the targeted entities. Jack will disable the firewall using the hack keys, and the codes will shut down the targets. That way, the initial app data will not be destroyed. I keep reminding myself that we don’t want to cause upset, just to help the world. It’s for their own good, although they may not realise it.”

Congratulations to all the winners of Atom Learning Young Author Awards 2022!

You can read more about the Atom Learning Young Author Awards here.

Sign up for updates about upcoming competitions from Atom Learning here.