William Shakespeare is widely regarded as not only the greatest writer in the English language, but also the founder of Modern English. He is credited with creating over 1,700 words that we still use today!

We’ve unearthed six everyday phrases invented by Shakespeare. Why not discuss these with your child and see if they can explain the meaning?

We use the phrase ‘wild goose chase’ when we’re talking about a hopeless search for someone or something. The phrase was first recorded in Romeo & Juliet, which was published in 1597:

"Nay, if they wits run the wild-goose chase, I have done, for thou hast more of the wild-goose in one of thy wits than, I am sure, I have in my whole five: was I with you there for the goose?"

In this excerpt, Romeo’s best friend Mercutio says that Romeo makes so many jokes and puns that he can’t keep up. He calls this effort a ‘wild goose chase’.

When we talk about ‘break[ing] the ice’, we’re discussing an action to reduce initial social tension and create a more relaxed social atmosphere. Another variant of this phrase is ‘ice-breaker games’, which plenty of schools use in their Year 7 induction activities to help new pupils bond!

Shakespeare introduced this phrase to the world in The Taming of the Shrew in 1594:

“If it be so, sir, that you are the man Must stead us all , and me amongst the rest, And if you break the ice and do this feat, Achieve the elder, set the younger free…”

In this scene, Tranio is talking about the difficulty of ‘wooing’ Katherine, who has an 'icy' (i.e. unfriendly) personality.

We use the phrase ‘green-eyed monster’ to talk about jealousy. The colour green is often associated with envy (an idea that originated in the Renaissance period), and the emotion is personified as an uncontrollable monster. Shakespeare introduced the phrase to the world in his tragedy Othello in 1622:

“O beware, my lord, of jealousy; It is the green-eyed monster which doth mock the meat it feeds on.”

In Act 3, Scene 3, the character Iago cunningly tries to convince Othello that his wife Desdemona is having an affair with another character. The word ‘beware’ in the previous line gives extra weight to the idea that jealousy is a dangerous emotion (and therefore a ‘monster’).

Now most known as the introductory line to a joke, the phrase ‘knock knock! Who’s there?’ was – surprise, surprise – invented by Mr William Shakespeare!

“Knock, knock! Who's there, i' the name of Beelzebub?”

In Macbeth (published in 1623), the comedic porter is literally asking who is on the other side of the door. However, the audience knows that there is something much more sinister happening... Macbeth murdered the King of Scotland in the previous scene so the fact that there is a dark irony to the porter asking who is behind the door (Macbeth) in the ‘name of Beelzebub’ – as Beelzebub was another name for the Devil.

Shakespearean phrase 5: Eaten me out of house and home

Plenty of parents will no doubt have been 'eaten out of house and home’ by growing children. It’s thought this phrase was first introduced by Shakespeare in his historic play Henry VI, Part I in 1591:

“It is more than for some, my lord; it is for all, all I have. He hath eaten me out of house and home; he hath put all my substance into that fat belly of his: but I will have some of it out again, or I will ride thee o' nights like the mare.’

In this scene, Mistress Quickly is complaining about her lodger, Sir John Falstaff. The knight’s appetite is out of control and he has not been paying his dues.

If someone has a ‘heart of gold’, they are thought to be a truly good and kind person. In Henry V, the King is described as being exactly that:

Gold has traditionally been seen as the most valuable metal, while the heart is frequently associated as the centre-point of human emotion in the body. Therefore, a ‘heart of gold’ suggests that the person in question is deeply pure and good.

In this lesson ‘Stress-Free Shakespeare’, Wing takes us through The Tempest, discusses the key characters and explains how to translate passages of the play into Modern English. 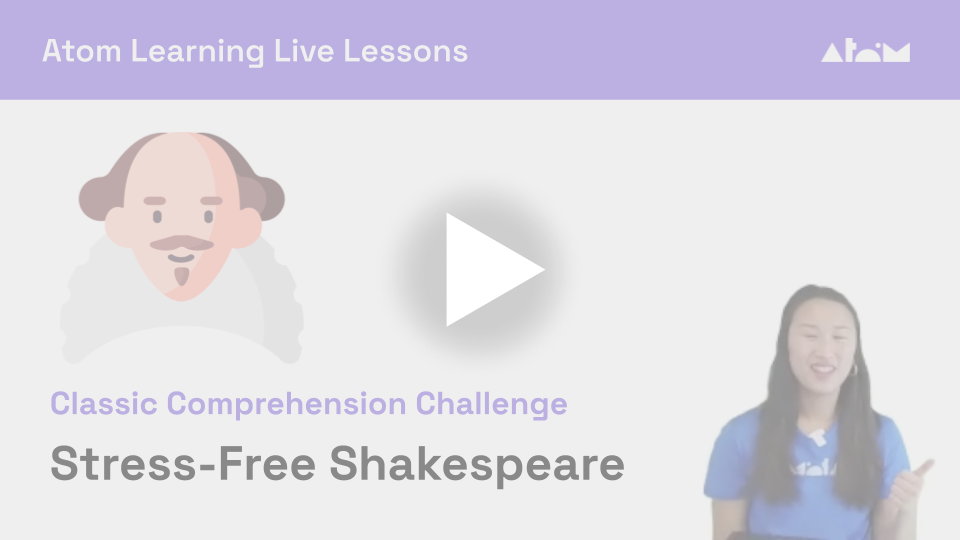 Start your 5-day free trial of Atom Nucleus today to access daily live lessons, as well as over 90,000 teacher-written practice questions, unlimited mock tests for 11 plus exams, and live exam prep courses to help your child build their skills.