What's the CAT4 test and how to prepare

If your child will be sitting the CAT4, you may be wondering exactly what this will entail and what their results will be used for. Let's explore what to expect when taking the CAT4, what schools use it for and how to approach it.

What is the CAT4?

The Cognitive Abilities Test Fourth Edition (CAT4) is set by GL Assessment, one of the UK's leading providers of formative exams including the 11 plus. The CAT4 is an aptitude test based on the analysis of data from around 25,000 children in the UK in four main topics (see below).

Schools use CAT4 tests for a range of purposes. The biggest difference between CAT4 and other well-known exams (such as SATs, 11 plus, GCSEs, etc.) is that it is designed to measure a child's natural ability – not their grasp of curriculum knowledge. CAT4 tests give teachers a rounded view, revealing elements of a child's ability that might not be obvious in the classroom.

CAT4 is used by schools to evaluate:

This information is useful for grouping together students who have similar skills and learning preferences. Secondary schools may use the CAT4 at the start of Year 7 to 'stream' students into sets (classes based on academic ability), ensuring that the teaching methods and pace are right for each child.

Some selective secondary schools consider the results of CAT4 tests taken during primary school as part of their admissions process.

Watch the video for an overview of CAT4

When is the CAT4 taken?

Students from Year 2 all the way up to Year 11 can take CAT4 at different levels of difficulty. Schools can choose when to administer CAT4, and timings will vary depending on what they're planning to use the results for.

The CAT4 is designed to be taken between September and November of the school year. This allows schools to use the results to inform decisions they make for the student or group of student's educational programme that year.

At primary school, children often sit CAT4 tests in Year 3 and again in Year 6. At secondary school, it is sometimes administered at the start of Year 7, at the end of Key Stage targets, or before students choose their GCSE topics.

CAT4 tests can also be used at any point to assess individual students who are joining mid-way through the school year.

Although the CAT4 does not aim to measure a child's IQ, it is similar in some ways to an IQ test for adults. The CAT4 assesses natural academic ability and potential, instead of learnt knowledge of core subjects (such as English, maths and science). Because of this, it is less curriculum-based than traditional tests your child will encounter at school. The types of questions are similar to those you would see on an IQ test (see below for examples).

Is the CAT4 test hard?

The CAT4 test is designed to be appropriate to the age of the student – the difficulty of the questions depends on the age of the student and what 'level' of CAT4 they are taking. Often, the hardest element of a CAT4 test is the fact that children are not likely to be familiar with the style of question. The questions don't look like the types of topics they will recognise from the classroom. If your child is taking the 11 plus, there may be a lot of crossover in the way the verbal reasoning and non-verbal reasoning questions are presented.

How is the CAT4 structured?

The CAT4 test is a timed assessment of 72 minutes, taken under exam conditions, in a multiple-choice format. Children are assessed in four 'batteries' across three main sections in the test.

Introductory information with practice examples is provided at the start of each section. This helps children familiarise themselves with the style and format of the questions immediately before the test begins.

Let's take a look at what CAT4 test questions are like.

Non-verbal reasoning is a critical thinking skill that involves solving problems and identifying patterns using pictures and diagrams. This is also assessed in many 11 plus exams.

In the CAT4 test, the non-verbal reasoning section is divided into two subsections:

Children are not allowed to use any additional resources such as a pencil or scrap paper in this section. 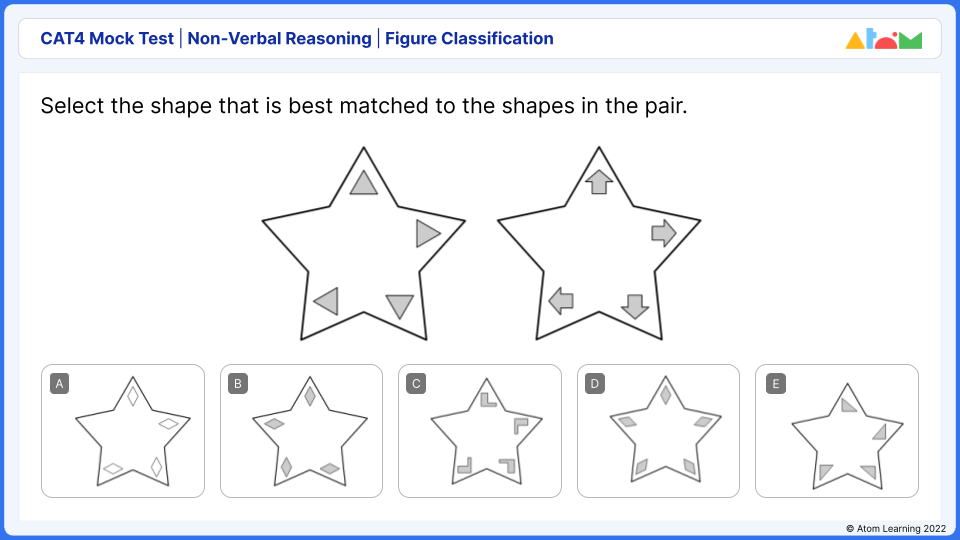 Students are shown a pair or group of shapes which are similar in some way, and are required to select one of five options that belongs to the group due to a shared characteristic.

The figure matrices test assesses your child's ability to recognise changes between shapes, and apply changes to other shapes. 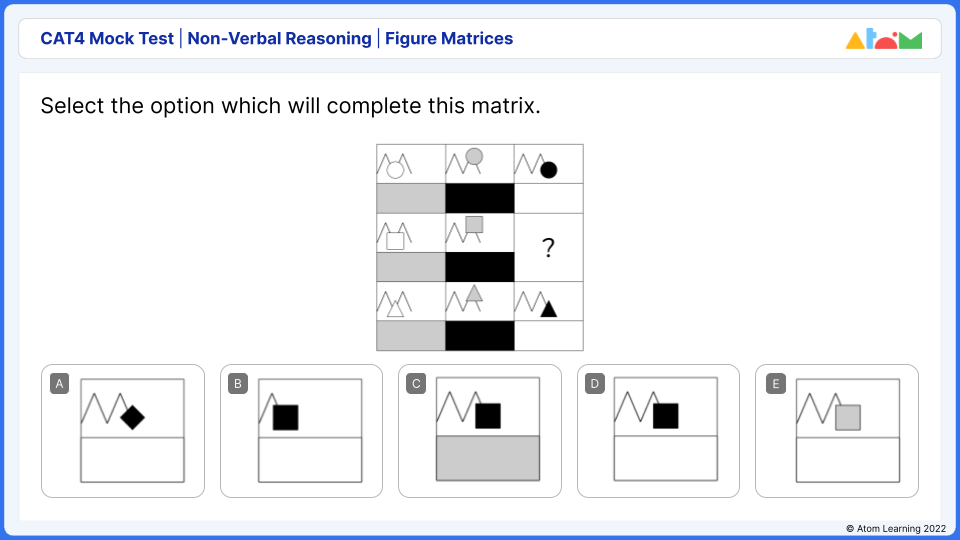 Your child will be presented with several shapes making up most of a larger pattern with one shape missing. They will need to discover the change between the shapes to determine which of five options is the missing shape.

Verbal reasoning is a measure of how a student thinks and solves problems using words. This is an area commonly assessed in the 11 plus. In the CAT4 test, this battery is split into two subsections:

As above, children are not allowed to use any additional resources in the verbal reasoning section.

In the verbal classification test, children need to identify associations between words and select similarly related words from a list of options. 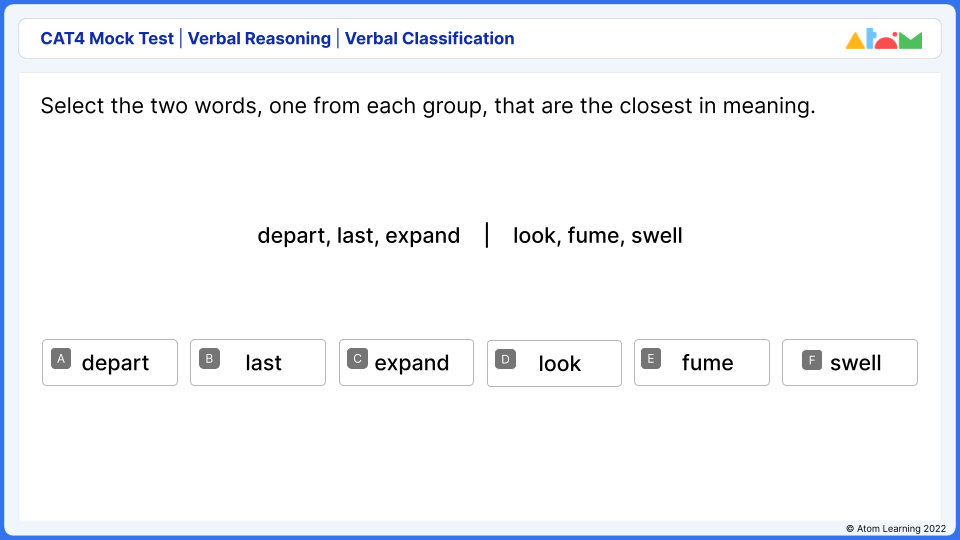 In the verbal analogies test, your child will need to determine the relationship between a pair of words. A third word will be presented, and your child needs to use the association between the first word pair to select a fourth word from a list of options. 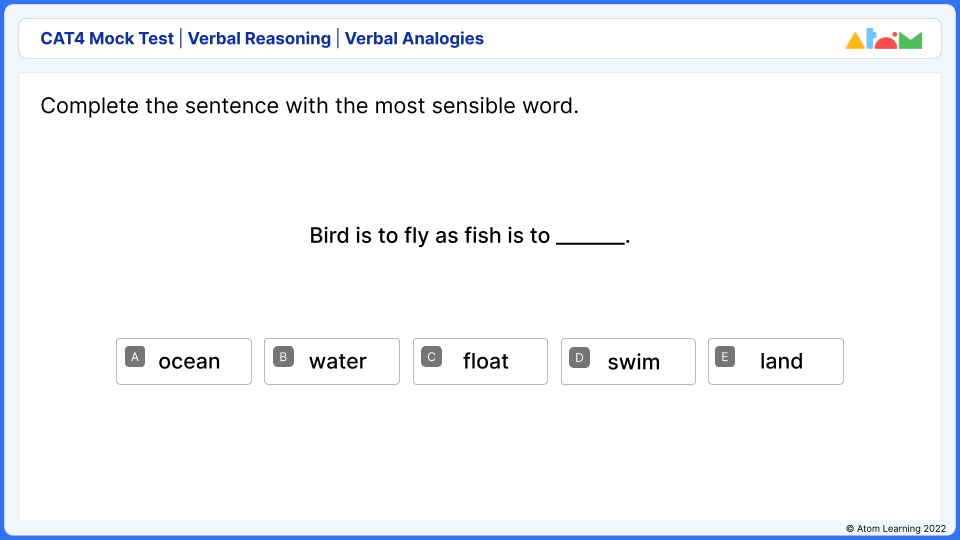 Quantitative reasoning measures your child's ability to solve problems using maths skills. It doesn't test their knowledge of the maths curriculum, but their ability to think using numbers. Questions will require them to identify similarities and patterns in numbers, and use these to analyse and come to logical conclusions. The two subsections in this test are:

This is the only part of the test where your child is allowed to use a pencil and paper for working out.

The number analogies test provides triplets of numbers that are linked together using a rule. The third triplet is missing the middle number. Your child will need to first work out which rule links the other triplets, and then apply it to the third triplet to identify the missing number from a list of options. 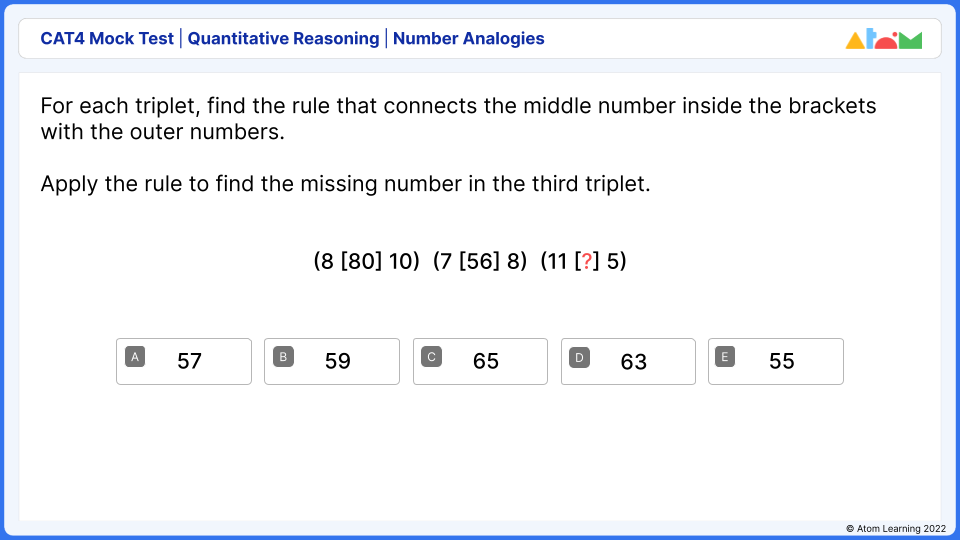 In the number series test, your child will be shown a sequence of numbers which are associated using a rule. They need to analyse the numbers to discover the rule and then apply it to find the missing numbers in the sequence. They will be able to select from a list of options. 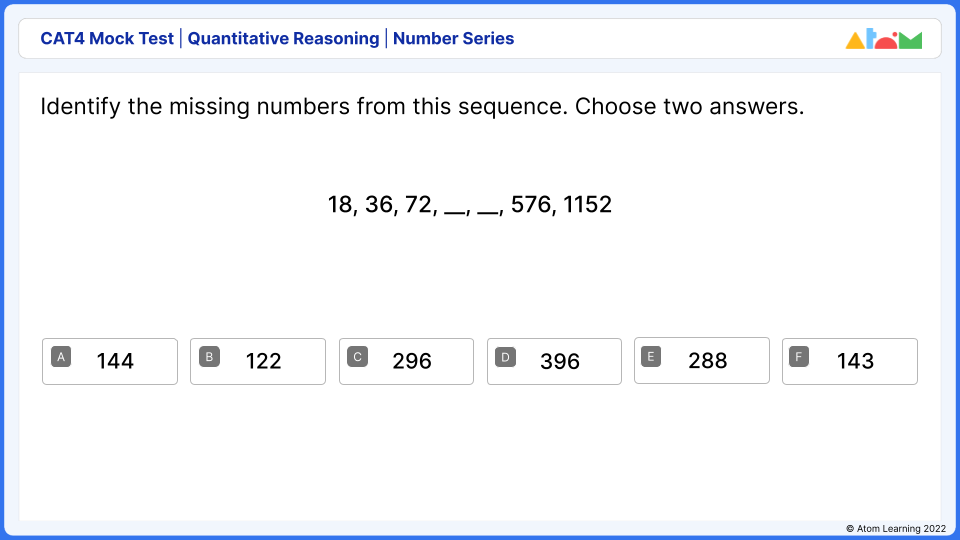 Spatial ability, also known as spatial reasoning, involves transforming visual images in the mind – a key skill for STEM (science, technology, engineering and maths). In the CAT4 test, the two subsections of spatial ability are:

Your child is not allowed to use a pencil and paper for working out in this section.

In the figure analysis test, your child is presented with a square that has been folded and holes punched out of it. They will need to visualise how the square would look if it was unfolded, and select the correct square from five options. 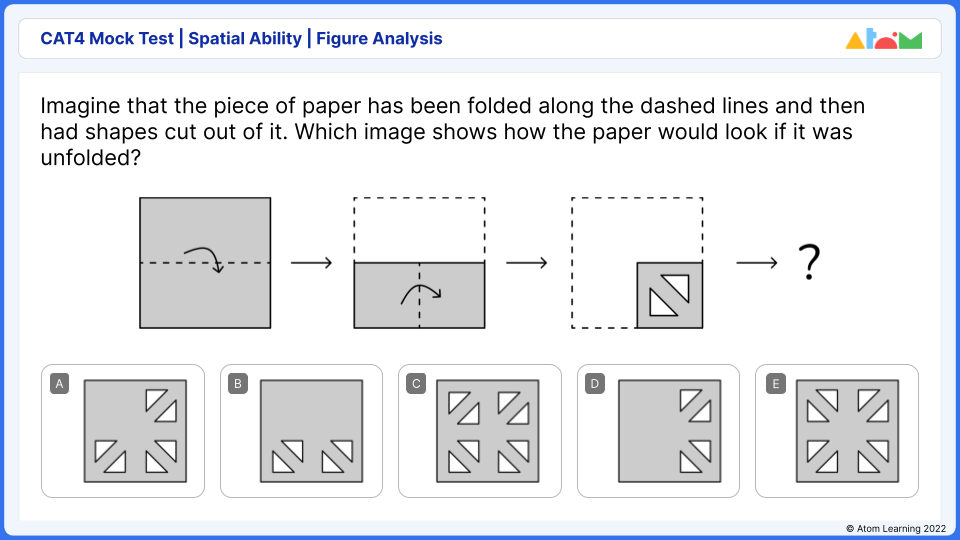 The figure recognition test assesses your child's ability to recognise shapes within other shapes. They will be asked to identify the presence of a simple shape within one of five complex pictures. 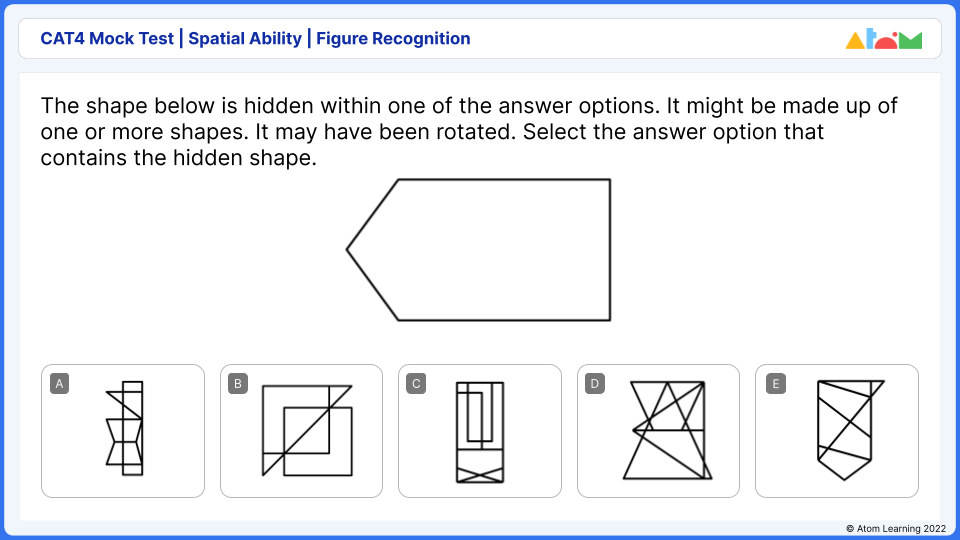 What is a good CAT4 score?

Your child's CAT4 test raw score (the number of questions they answered correctly) will be used to calculate a National Percentile Rank (NPR) and a Standard Age Score (SAS). This is the most important piece of information that schools derive from the test.

The SAS is based on the child's raw score, which is adjusted based on their age (in years and months) at the time of the test. The SAS is then mapped onto a normal distribution curve where a SAS score of 100 places a child as exactly average for their age group.

Grammar schools and selective independent schools are often looking for Standard Age Scores of at least 115, and often higher, to fill their places in Year 7. Will parents get the CAT4 results?

Can you practice for a CAT4 test?

You may be wondering whether your child should revise for CAT4, and if so, how to prepare for it. As the CAT4 test is designed to assess a child's natural academic ability and not their learnt knowledge, GL Assessment does not advise that pupils practice ahead of time. They don't produce sample papers or example tests.

For many children, however, the CAT4 test may be the first time they have encountered these styles of questions. For some, they will be the child's first experience of taking an assessment in exam conditions. While it is not entirely possible to revise for the test, there is no harm in your child practising a few example questions so that they feel comfortable with the format. This way, they will go into the exam feeling confident and knowing what to expect.

This question pack contains the eight example questions used above, along with their answers and explanations.

Atom Nucleus is an award-winning, all-in-one platform for exam preparation at home.

Our CAT4 practice tests mirror the digital edition of the CAT4 test in their timings, the number of questions, and skill-based content.

Familiarity will help your child to feel confident and perform their best when sitting the CAT4, whether it's for senior school entry or academic streaming.

You can try Nucleus free for 5 days (cancel anytime).